Hey guys! this post has been terminated, but I have rewritten it, according to new data that puts the facts into place.

On March 31st, 1909, the construction of the world’s largest ship began, with a future of strange decisions. On a night in September, 1906, the president of the white star line and the owner of the Harland and Wolfe shipyard, builder of every white star liner, sat at a dinner table devising a plan to steal the fame from Cunard line’s Mauritania, the current largest ship in the world. The plans were drawn to build three ships, the Olympic, the Titanic, and the Gigantic. The Gigantic would be larger than the two others, but the titanic was slightly larger than the Olympic. The Olympic was the first of its family to be built and finished, and from the very beginning, the RMS Olympic was a mishap magnet. First, there was a fire in the 2nd class kitchen, which lasted for two days, fortunately causing no damage to the ship itself. The first real problem was when the ship was rammed by the SS Hawke in 1911. But on march 2nd, 1912, the Olympic flung a propeller into the depths of the sea, which was an easy fix, though unfortunately, it delayed the maiden voyage of the titanic, taking a propeller stamped 401, the only propeller on the titanic with that identity. That was the last of the mishaps for the Olympic for a while, but one question remains, was there a switch? In my opinion, with all of the evidence I have found, the answer is yes, though many think it’s just a conspiracy.

There isn’t much reason given for the switch, but compelling information I have found makes the situation seem even more real. The first person unaware to the situation to discover the switch, was Lawrence Beasley. After the cataclysm at sea, he noted that the keel was crooked, and a room on the ship was named the Olympic room, strange don’t you think? A survivor of the steerage class passengers noted that the two ships were switched, and they named that room the Olympic room because it was bad luck to change a ship’s name. If you look at the wreck, you can see that the personal suite that J.P. Morgan had built on the Titanic, is not visible. Also, when looking at pictures of the mighty Titanic in the shipyard, you can see the second deck promenade windows are evenly spaced on the titanic, but unevenly spaced on the Olympic. On the wreck, they are unevenly spaced, as well as in pictures of the maiden launch. Also, when being built, the titanic had 14 port holes on its starboard and port-side bow, but in pictures of the maiden launch, it has 16 port holes, the same number as the Olympic, but lets talk about the plan. There isn’t much purpose given for the switch, but the White Star Line soon discovered that the switch was illegal, and they were rich, so rich in fact, they were so selfish they planned to sink the Olympic in place of the titanic so that nobody would ever find out about the switch. To bad I wasn’t alive, I could have stopped the disaster with my skills at arguing and persuasion! crap! anybody got a time machine? Wait…, shoot, paradoxes. Aaaagh!

Now, anybody could say all the things I have just said about the switch were a bunch of false accusations, but explain this; all this happened during a coal shortage, so coal was way to expansive for pointless trips, so why was the RMS Californian sent out to stay close near the titanic carrying nothing but wool sweaters? the plan was to have the Californian to stand by and come to the rescue of the passengers when the ship sank, so that nobody died. Look how well that turned out. One of the officers gave incorrect coordinates, so the Californian was 10 miles away from the titanic as it plummeted to the bottom of the cold, dark Atlantic ocean. The captain of the Californian saw the titanic in the distance, but it was so far off it didn’t look like the titanic, and the titanic was shooting white flares, when the plan was to shoot off colored flares, red, blue, etc. When the captain of the Californian, Stanley Lorde, awoke the next morning and was informed of the sinking of the titanic, he knew what was coming, just as much as J. Bruce Ismay, the president of the white star line, this would forever go on both their names. Now before I conclude, I will note that the Captain Edward Smith of the titanic ignored ice field warnings, and went on full speed through the hazard zone, and when looking at the wreck of the stern: 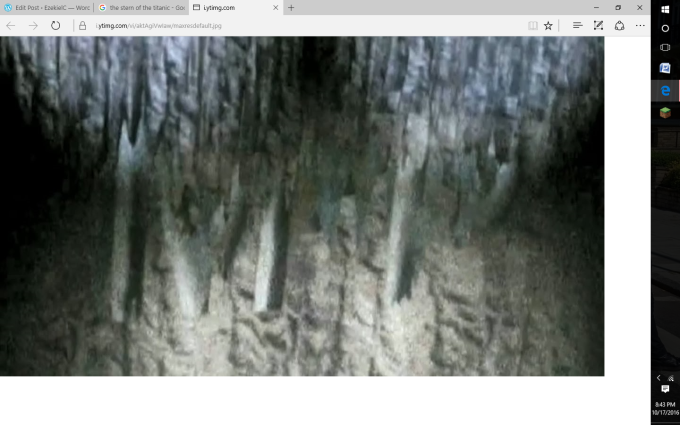 why is there an m and a p? if I had the picture zoomed out it would spell this; TMPANIC.

Let this sink in before you do your research, cause it will drive you insane, trust me, I’ve been there. Oh, and if anyone was wondering, the white star line was mocked for the name Gigantic, so it was renamed the HMS Britannic, the hospital ship sunken by a during world war 1, though I think it was sunken by a bomb planted by a German spy. Goodnight y’all, enjoy, let me know if you did or didn’t like it in the comments, and tell me if I missed anything! until next time, farewell.

4 thoughts on “A Hidden Failure”